A Guide to Fume Cupboards 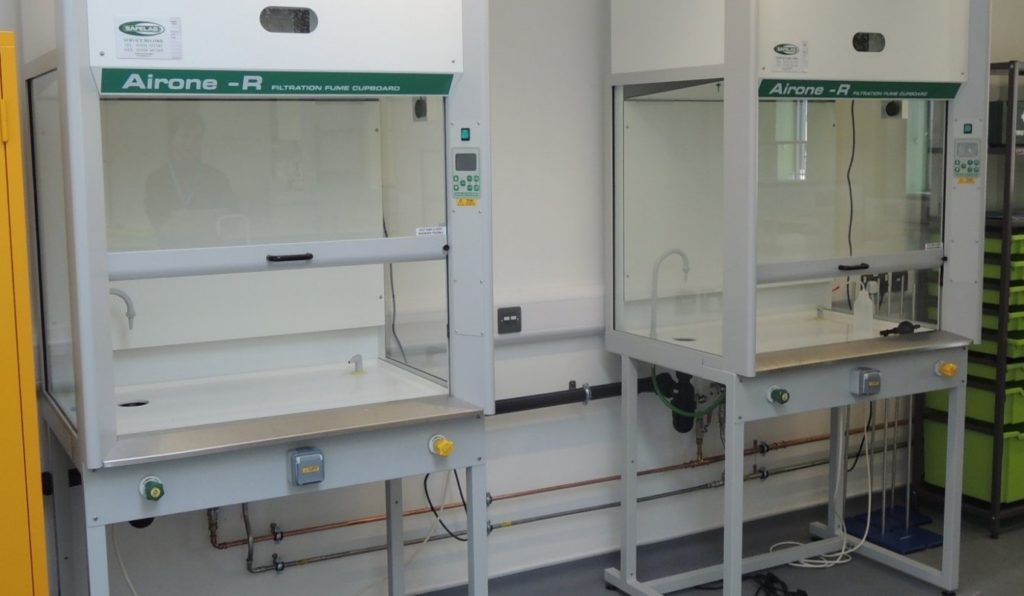 Safety in labs is of paramount importance but a lot of experiments take place at a workbench – not always the safest location. Knowing when to utilise the laboratory’s fume hood can provide you with an extra level of protection against chemicals that give off toxic fumes. A fume cupboard can contain the fumes and remove them from the room, removing the possibility of ingesting harmful chemicals.

Fume cupboards are named by COSHH Regulations as a laboratory health and safety essential.

What is a fume cupboard?

Fume cupboards control exposure to airborne contaminants such as toxic, offensive or flammable vapours, gases and aerosols. The cupboards rely on extraction, which could be controlled by the building’s air conditioning and heating system. Fumes are drawn into the hood and expelled through a neutralisation filter.

In order to provide a good level of protection, fume cupboards need to be used effectively and maintained appropriately. The airflow within the fume cupboard must be enough to control the airborne contaminants effectively. Think about the factors that will affect the airflow of the cupboard: design, size of the window opening, type of process, and the substance being controlled.

When working in the lab, it’s important to understand the hazards associated with each of the chemicals that you’re working with. Users in the space should understand what the purpose of the cupboard is, and how to use it.

How to use the fume cupboard

When installing the fume cupboard, make sure that it is placed away from windows, doors and walkways that may interfere with the ventilation system. This will help to stop airborne contaminants from spreading around the laboratory. Turn on the fume cupboard before using it and avoid letting your head enter the hood opening.

When working in the fume cupboard, all materials must be kept inside the hood at least six inches from the window opening. The sash opening should be as small as possible to minimise the chance of fumes escaping. When the fume cupboard is not being used, remember to close the sash. If working with large equipment, elevate it from the base of the hood to allow for air circulation. Once finished, remove the chemicals and store them safely away from the fume hood.

When writing an emergency action plan, include how to deal with the fume hood in case of fire or power failure. In an electricity blackout, it is important to close the sash on the fume cupboard immediately and then evacuate the building. With a lack of power, the fan system will not work properly so the fume hood will not have a sufficient ventilation.

Fume cupboards are designed to meet recognised standards, so in order to maintain them, it’s important to follow supplier guidance. Based on this, create a service plan for cleaning the fume cupboard and hood, checking the airflow indicator is working and replacing control valves and outlets regularly.

Before beginning to work with the fume hood, check for signs of damage – if you notice a fault, it should be reported immediately. Avoid using heated equipment in the cupboard, and if chemicals are dropped or spilled, clean it immediately, using personal protective equipment if necessary.